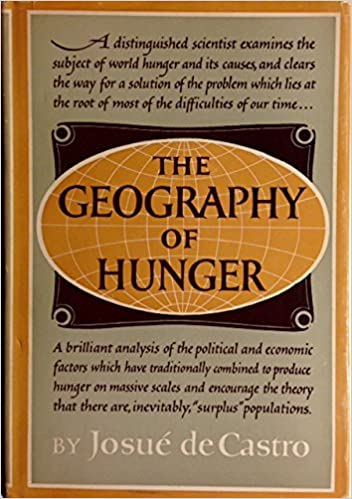 I discovered both “The Geography of Hunger” and its later revised edition “The Geopolitics of Hunger” at my favourite used bookstore in Manitoba, A La Page in Winnipeg’s St. Boniface. At first I was very skeptical about this book; the title of the book and the subject struck me as very bourgeois and neo-Malthusian. True, one shouldn’t judge a book by its cover, however the choice of words in a book’s title can reveal much about its contents. For example, I find that I usually don’t like books with the word “inside” in the title (ex. “Inside ISIS”, “Inside the Kremlin”, “Inside Central Asia” [side note: don’t read Dilip Hiro]). That’s because I have often felt that authors/publishers insert the word “inside” into a book title’s as a flashy marketing tactic and as a means of concealing the substandard content of a book. Consequently, I am deterred from reading a book if I see the word “inside” in the title. Of the 1300+ books I own, 17 of them have the word “inside” in the title.

Anyhow, I am thankful I ignored my initial inhibitions about this book; it is undoubtedly one of the most important books I have ever read and contributed immensely to the development of my world outlook. Although I had long considered myself a Marxist-Leninist when I bought and read this book, I had still not fully expunged from myself neo-Malthusian arguments about hunger and overpopulation. Scientifically speaking, too many humans on a finite planet creates hunger, at least to some extent, no? That was my thinking when I first opened this book — and was I in for a massive shock!

A physician, nutritionist, geographer, and public official, Castro completely inverts neo-Malthusianism. According to Castro, rather than hunger being a “natural” result of overpopulation, hunger is an entirely man-made social phenomenon that leads to overpopulation!

You are probably thinking, “WHAT?! HOW CAN THIS BE?! NONSENSE! THIS IS BLASPHEMY!”

But Castro is no quack pseudo-doctor like Dr. Oz if the latter lived in the 1930s. He supports his arguments with an incredible amount of scientific detail and evidence: the affect of hunger and nutrition on fertility both at the time of publication and during historical periods of famine, cellular survival and reproduction, the socio-economic aspects of the biological manifestation of hunger, etc.

Withhold your inhibitions and don’t reject the author’s arguments until you read this book; it is impossible for me to summarize all his evidence here (and right now). This book is truly a masterpiece and seminal work on hunger and overpopulation.

"When one individual inflicts bodily injury upon another such injury that death results, we call the deed manslaughter; when the assailant knew in advance that the injury would be fatal, we call his deed murder. But when society places hundreds of proletarians in such a position that they inevitably meet a too early and an unnatural death, one which is quite as much a death by violence as that by the sword or bullet; when it deprives thousands of the necessaries of life, places them under conditions in which they cannot live – forces them, through the strong arm of the law, to remain in such conditions until that death ensues which is the inevitable consequence – knows that these thousands of victims must perish, and yet permits these conditions to remain, its deed is murder just as surely as the deed of the single individual; disguised, malicious murder, murder against which none can defend himself, which does not seem what it is, because no man sees the murderer, because the death of the victim seems a natural one, since the offense is more one of omission than of commission. But murder it remains."

"When we think without Marx’s perspective, that is, without considering class interests and class power, we seldom ask why certain things happen. Many things are reported in the news but few are explained. Little is said about how the social order is organized and whose interests prevail. Devoid of a framework that explains why things happen, we are left to see the world as do mainstream media pundits: as a flow of events, a scatter of particular developments and personalities unrelated to a larger set of social relations — propelled by happenstance, circumstance, confused intentions, and individual ambition, never by powerful class interests — and yet producing effects that serve such interests with impressive regularity."